By Friday I had completed all of my original goals for my trip. Now I had to improvise. Fortunately I had researched a lot of establishments which were outside of the neighborhoods I was focused on. My major goal for the day was to walk across the Golden Gate Bridge but I did not want to do this in the morning because it might be hidden in fog. I decided to visit the Mission District in the morning since it is easily reached using BART.

I took the MUNI subway to Castro Street Station because there was one other San Francisco Zen Center location I wanted to find, the Hartford Street Zen Center. As soon as I exited Castro Street Station I saw the famous Castro Theater. And I found the Hartford Street Zen Center pretty quickly since it was just one street to the east. I didn’t want to see anything else in the Castro District so I continued to walk east until I came upon Dolores Park. Naturally I stopped to climb the hill in the park and took photos of the view and every park monument I could see. The park has some palm trees which are exotic looking for an East Coast native. From there it was easy to find the Mission Dolores church.

I continued to walk east to find Valencia Street. There were several establishments on Valencia Street which I wanted to see. First I located the Stage Werx Theatre which rents its performance space to many theater companies. Although the San Francisco travel guides only mention a few theaters that stage touring musicals, San Francisco actually has an extensive theater community which you have to research. I also saw 826 Valencia which is associated with the writer Dave Eggers. It has an interesting mural on the facade.

Further up Valencia Street I found Dog Eared Books, Owl Cave Books, and Borderlands. Borderlands was the book store I really wanted to visit since they specialize in science fiction. But they would not be open until Noon and I did not want to wait around that long before heading out for the Golden Gate Bridge. However, I was able to have breakfast at the Borderlands Cafe. I ordered a strawberry lemonade and ham croissant. Dog Eared Books did open at 10:00 a.m. so I went there and bought some more books. I bought This Present Moment: New Poems by Gary Snyder and Time Out Los Angeles. Other establishments I located were Owl Cave Books and The Marsh Theater which wasn’t in my notes. I did take a postcard from their promotional materials. 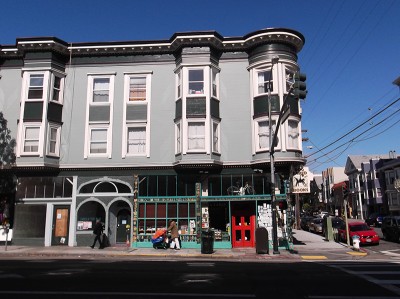 I finally managed to obtain a copy of the San Francisco Chronicle newspaper from a vending machine. Every time I tried to find this paper at a Walgreens, they were sold out.

I continued to walk east until I found Mission Street. I didn’t really make any effort to find anything on Mission Street. I just observed whatever I happened to come across and took photos of anything of interest. I did come across a Dark Room Theater which appeared to be another performance space which I missed during my research. As soon as I saw the 16th Street Mission BART station I decided to cut short my exploration of the Mission District. Mission Street was very interesting but sort of ghetto. I was eager to see the Golden Gate Bridge.

I dropped off my books at my hotel and headed back out to see the Golden Gate Bridge. The bridge is clear across town so it takes a long time to get there and requires several bus trips. I took the 38 bus to Park Presidio Boulevard and then transferred to the 28 (19th Avenue) MUNI bus to the Golden Gate Bridge. I did encounter a few other tourists on the 28 (19th Avenue) MUNI bus. I walked all the way across the Golden Gate Bridge and then walked back. This probably amounted to four miles of walking if you include the walk around the observation point on the other side of the bridge. I took a lot of photos! Some of my photos look just like the classic photos of the Golden Gate Bridge you find in travel guides. The pedestrian walkway was crowded with tourists and bicyclists. The view was spectacular! I walked around Vista Point. Sausalito was actually further up the bay, but I had mistaken the U.S. Coast Guard Station and the Presido Yacht Club for the city and was wondering why it looked so small and inconsequential. 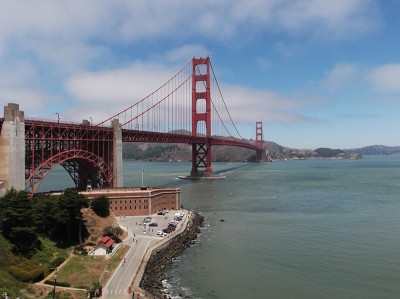 After walking back across the Golden Gate Bridge I took the 28 (19th Avenue) MUNI bus back towards downtown but I did not transfer to the 38 bus. The 28 (19th Avenue) MUNI bus only took me as far as Laguna and Chestnut Street. A large group of Asian school children discouraged me from getting on the 30 Stockton bus and it was proving to be a long wait for the next bus. Looking at my travel notes on my smartphone, I noticed that I could walk to Lombard Street and see the famous crooked street which I hadn’t seen yet. It was a long walk up some hills to get there. But first I came across the George Sterling Park which I spent a few minutes exploring. George Sterling was a Bohemian poet who was quite famous in his day, but he is practically forgotten now. I only came across his name while researching San Francisco. I did order a copy of his book The Thirst of Satan: Poems of Fantasy and Terror on Amazon but it did not arrive until I got home.

When I arrived at Lombard Street I found it swarming with tourists. They were so thick it was hard to find a spot in which to take photos and cars could hardly squeeze through to begin winding down the crooked street. It was sort of ridiculous since this street is very picturesque but hardly that fascinating. 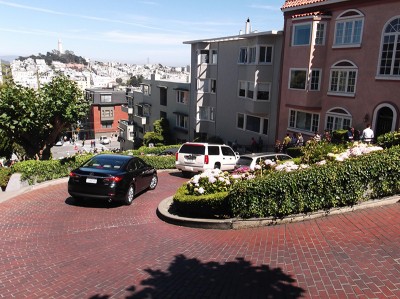 From Lombard Street I proceeded down to Columbus Avenue and spent more time in North Beach. I went into Mario’s Bohemian Cigar Store Cafe but I only had a coke since I was very thirty from all that walking. Then I could not resist stopping in at City Lights Bookstore again. But I felt obligated to buy a book from their Theater section instead of more poetry. I took a chance on Mojo and Other Plays by Jez Butterworth. I have never heard of this playwright. He is a contemporary British playwright and I’m not familiar with contemporary British theater.

After making my purchase, I walked to Market Street and found Lotta’s Fountain in front of the Palace Hotel. That must have been near the Montgomery Street Station which I used to get to the Powell Street Station and from there, back to my hotel. After that much walking I needed a lot of time to recuperate. I brought my old DELL laptop with me on this trip. It served as my digital command center. I checked my Clipper card balance and discovered that I was running low so I added $10.00. I also made a reservation for 7:00 p.m. at the Minas Brazilian Restaurant. I’ve become slightly interested in Brazil as an exotic travel destination because I discovered that Brazil has a vibrant theater community which is virtually unknown in the United States. I have a nasty tendency to become fascinated by anything obscure which might be caused by an ingrained inclination towards the occult and hidden knowledge. This fascination with the arcane is even responsible for my involvement with computer programming.

To get to the Minas Brazilian Restaurant I had to take the MUNI subway to the Van Ness Station. My Clipper card did indeed not have enough value left for this fare so I had to add $5.00 cash to it using the station vending machines. Before going to the restaurant I did find the SFJazz Center and took a few photos of that. Along the way I saw a homeless man pissing very visibly into the street which was pretty disgusting.

Minas Brazilian Restaurant provided probably the best meal I had in San Francisco but it was also the most expensive, $51.11. I had a Caipirinhas (drink), Frutos do Mar Tropical (served in half a pineapple used as a dish), and Mousse de Maracauja for desert. While waiting for my meal I watched a Brazilian sports channel on satellite TV. It was mostly about soccer. I accidentally left my sweater on the back of my chair and had to go back for it. Fortunately it was chilly enough to remind me to get my sweater.

I probably should have spent more time on Mission Street but it was hard to know how long it would take to walk across the Golden Gate Bridge and I couldn’t miss that. I think I did an excellent job packing in more essential tourist experiences on this largely unplanned day. I’m pleased that I enjoyed an unique dining experience at Minas Brazilian Restaurant. I didn’t really plan to visit any fancy restaurants on this trip but I did manage to eat at a variety of places.