The 1960s is an era before my time but in the 1980s it seemed like a golden age in myth and legend. Pop culture still contained many references to the 1960s. It is easy for me to idealize the 1960s because although it seems vaguely familiar, it is not tied to any unpleasant memories or specific events. Therefore I wanted to visit the center of the Hippie universe, Haight-Ashbury. To prepare for my trip, I read the book The Haight-Ashbury: A History by Charles Perry and bought a few classic hippie albums on CD, even a Grateful Dead CD. 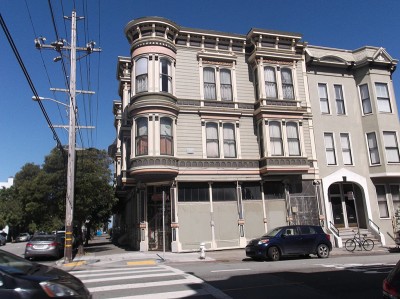 I took 7 Haight-Noriega MUNI bus towards Haight Street but got off at Pierce Street because I wanted to find Kenneth Rexroth’s old apartment building first. I had finished reading the Linda Hamalian biography, A Life of Kenneth Rexroth, a few weeks before my trip. After taking numerous photos of this Victorian house I walked further along Page Street to find the San Francisco Zen Center. I’ve read several books about the San Francisco Zen Center, including Shunryu Suzuki’s Zen Mind, Beginner’s Mind and Crooked Cucumber, a biography of Shunryu Suzuki. Zen appeals to my contemplative nature and inclination towards mysticism. But I suppose I lean more towards shamanism since my spirituality relies on my ability to explore the depths of the subconscious mind. Buddhists don’t seem to appreciate the visionary experience. They only value the transcendence of consciousness to feel one with the universe, i.e. enlightenment. You can find some interesting blends of shamanism with Zen in the psychedelic 1960s when the youth experimented with LSD to experience a chemically induced enlightenment. 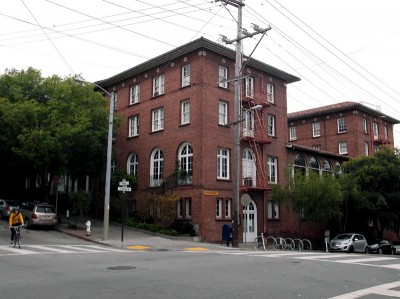 Next I walked to the Alamo Square Park which proved to be very disappointing. The grass was brown because of the drought. The city is not watering the lawn in this park. And one of the painted ladies was covered in scaffolding. It was being repainted. On top of this, it was early in the morning and the sky was more gray than foggy. I was unable to take a classic photo of the “Painted Ladies”. My photos just look dreary.

I walked back to Haight Street although I initially went in the wrong direction. Once I reached the corner of Haight Street and Ashbury Street I managed to locate the Grateful Dead house. Unfortunately there was some road work being done on Haight Street so that really ruined many of my photos. I walked all the way to Golden Gate Park but then walked back up Haight Street to Booksmith which was open by 10:00 a.m. At Booksmith I bought some travel guides; The Rough Guide to Los Angeles and Time Out Boston. I may make Boston my next destination since I can get there via an Amtrak train and avoid airport security. I had lunch at the Blue Front Cafe. I had a glass of lemonade and a Clubhouse Sandwich, fresh baked turkey and crispy bacon on toasted bread. The sandwich was huge so I only ate half of it. After eating I went to Amoeba Music. This record store had a huge selection so it was hard to decide on what to buy. They had an impressive collection of world music and I was intrigued by Brazilian music but I don’t know anything about that. I took a chance on a double CD of Françoise Hardy, a French pop music, yé-yé singer. And I bought a Die Antwoord CD, Donker Mag, because I had seen the movie Chappie on the plane to San Francisco.

There isn’t much to do on Haight Street except shopping and eating out so I went back to the Golden Gate Park which offered a huge park to explore. I saw a lot of homeless people camping out in the park. I soon found the National AIDS Memorial Grove which proved to have some beautifully landscaped paths through lush vegetation. I then came across the Music Concourse and headed for the de Young Museum, a fine arts museum in Golden Gate Park. The de Young Museum had two floors of exhibits featuring anthropological artwork from Africa and Mesoamerica, and American art from the Hudson River School and the Arts and Crafts Movement. I did see two Salvador Dali paintings which were popular as always. You often have to get in line to see a Salvador Dali painting. I managed to find my way to the tower where I could take photos of the city and the California Academy of Sciences. I bought a book of photographs South of Market by Janet Delaney. Some of these photos were on display as a special exhibit, Janet Delaney: South of Market January 17, 2015 to July 19, 2015 in Gallery 12. I liked these gritty urban photos of what the South of Market district looked like before redevelopment made it the home of Internet startups. At the museum cafe I just bought something to drink. I wish I knew what I bought since I had never seen these products before. The coffee flavored drink may have been Califia Farms Cold Brew Coffee and the citrus drink may have been a can of  Sanpellegrino Aranciata. When I walked outside I found the “skyspace”, James Turrell’s “Three Gems”, which is basically just a circular room with an oculus like the Pantheon in Rome which allows you to view part of the sky.

Next to the de Young Museum I came across the Japanese Tea Garden which was really cool. It was very popular and quite crowded with tourists. I had to pay a $8.00 entrance fee. I saw the large statue of the Buddha, the koi (ornamental varieties of domesticated common carp), the Zen rock and sand garden, and the pagoda. The Japanese Tea Garden had a restroom which I used and a gift shop which didn’t have anything to interest me. 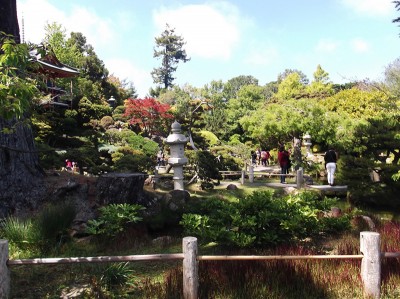 I was tempted to visit the California Academy of Sciences but it was expensive and I felt I had done enough for the day. Golden Gate Park was already an addition to my original plan to just explore Haight-Ashbury. So I found my way out of the park and then walked along the southern edge of Golden Gate Park trying to get back to Haight Street. It was impossible to walk all the way around without re-entering the park but eventually I found my way back to where I came in. Along the way I briefly stopped at the Shakespeare Garden. I know there was a lot of other things to see in Golden Gate Park but it is a huge park and you would have to devote an entire day to fully explore it.

Once I got back to Haight Street I went to Loved To Death, a store which sells macabre, Gothic trinkets, and bought a scorpion in lucite keychain since it was probably the cheapest thing they sold. I then retraced my steps to Kenneth Rexroth’s old house and San Francisco Zen Center to take photos under better lighting conditions. I was going to visit the San Francisco Zen Center book store but it appeared to be closed even though it should have been open by then. That was disappointing because it was the only real reason I walked all the way back there.

I then walked all the way to Market Street looking for a bus stop but instead I entered the Van Ness Station to take the MUNI subway up to Powell Station. I entered the Visitor Center and picked up a few free brochures. Then I went to a Carl’s Jr. fast food restaurant and had a Western Bacon Thickburger, french fries, and a Sprite. A homeless man made a scene until the security guard called for the police. That made me a little nervous.

That evening I saw a play at the Exit Theater, not far from my hotel. This was the second nightlife activity I scheduled which made this trip really special. The Exit Theater is on Eddy Street, in the Tenderloin, a very sketchy part of town. I snapped a photo of the exterior on my first day in San Francisco but I can see why nobody had taken any photos of the theater. You don’t want to look like a tourist in the Tenderloin. I told them I bought a ticket online and they gave me a theater program as my “ticket”. I bought a can of Pepsi before the show and sat on a stool in the cafe, staring at interesting photos of past performances on the wall. There was a very small stage with purple lighting at the back of the cafe. It was all very shabby but cozy like a genuine artistic space. 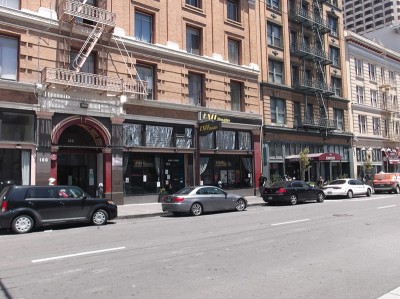 The play I saw was The Pillowman by Martin McDonagh. This was a play I actually wanted to see. I’ve read a book of Martin McDonagh’s plays, but not this one because it hasn’t been published except as an actor’s script. This production was put on by the Breadbox Theatre Company. An actor was sitting blindfolded on stage while the audience filtered in. He sat there patiently for fifteen minutes or more while everyone got settled. What actors go through for their craft! The stage was an almost perfect box theater and very ghetto. This was a very dark play about torture and child murder and telling stories, really grim but slightly humorous. It was probably the darkest play I’ve ever seen or read. Martin McDonagh’s other plays are kind of dark, but not to this extreme.

There were lots of street people outside when the play let out and the theater staff had to beg them not to murder anyone. I’m not sure if this was a joke or not! It was very sketchy. Of course, the content of the play may have inspired the plea against murder.

But I was very pleased to have seen this play during my vacation. A little theater makes travel seem more like a cultural experience. I wish I was more active in the theater. I do have a short play which will be performed in January and I’m thinking of writing a novel about a very mysterious actress, sort of a Jungian animus figure, to represent the yearning for the inexpressible as glimpsed in great theater. Anyone can now write and self-publish a novel without losing any respect. I think writing that novel would be a great way to entertain an elaborate fantasy and it could be the best way to ultimately get what I am after. The theater does not offer fame or fortune to a playwright. You have to be in it for the sheer love of drama as a form of literature.