I have driven pass Danville many times on the way to Philadelphia or the Poconos but I have never stopped to see what may be found there. Actually I remember driving through Danville a few times on the way to Knoebels Amusement Park. On the second day of the Memorial Day weekend I finally spent some quality time in Danville to check it out.

One of the major incentives for finally making this trip was my discovery last year of the Robbins Trail, a hiking trail with my last name! Naturally I had to hike my namesake trail. The full name of the trail is the J. Manley Robbins Trail and I don’t think I have any remote relatives by that name. Another good reason to visit Danville is because the Geisinger Medical Center is located there. Geisinger is a huge medical complex which serves as the entire region’s trauma center. There is a good chance that you may be sent to Geisinger if you are in a serious accident in Central Pennsylvania. Even at work I frequently encounter references to Geisinger since we transport patients there.

The trailhead for the Robbins Trail is behind the Perkins parking lot just north of the town. It begins with a pleasant path through some underbrush not far from the highway into town. The entire trail is perfectly level. The Robbins Trail is actually a bicycle trail but I did not see anyone riding a bike on it, just joggers. At around a trail sign that reads Roup Spur, the trail makes a turn to head back the other way along Mahoning Creek and though a more heavily wooded area alongside a mountain. Eventually the trail ends back at the Perkins restaurant and a Sunoco gas station where there is a bridge over the Mahoning Creek. I was glad this was a circuit trail because I did not want to retrace my steps. 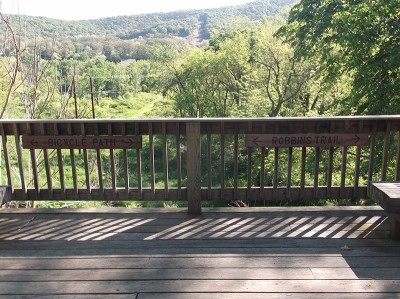 After hiking that trail I headed into the city of Danville. I found a parking lot hidden away down an alley alongside Mill Street, the main business street. You would never find this parking lot just wandering into town without doing your research. But I suppose I could have parked along Mill Street because it was a Sunday morning and the town was completely dead. It was like a ghost town. The only people I saw where a few veterans running around in motorized wheelchairs.

Danville is clearly a town suffering major fiscal distress. I saw a lot of closed businesses along Mill Street with many boarded up storefronts. Sometimes it was hard to tell if an establishment was still in business. And the street was completely empty of shoppers or local residents. I probably just picked a bad time to visit although it was great for taking photos without feeling conspicuous. Everything was closed. 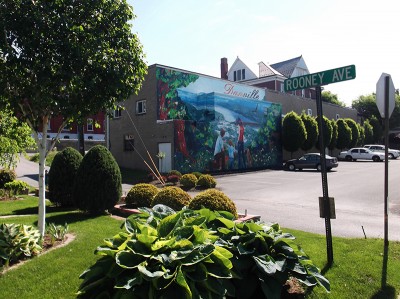 Years ago I would have been nasty and declared Danville a dump which is not worth taking the time to visit. But after traveling quite a bit I can see the hidden charms of any place. Danville may be a bit shabby but it seems like a real town that hasn’t been taken over by tourists. It has a lot of that Pennsylvania podunk town charm with dilapidated taverns on street corners and old storefronts. Still I would have expected a more lively town with the Geisinger Medical Center in town. Where are all those doctors spending their money? 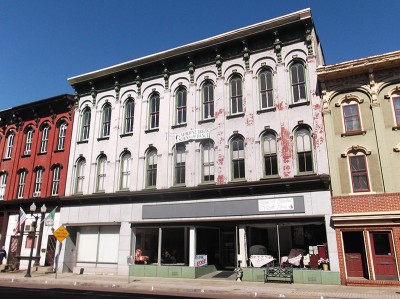 There wasn’t anything to do in Danville since everything was closed, but I wandered up and down Mill Street taking photos. While researching the town, I was annoyed to find so few photos of anything on Mill Street. Google Street View is unavailable for this street so it was almost impossible to determine where anything is located. Well I fixed that! I took 118 photos that day so I have a photo of everything on Mill Street, although one side of the street was directly in the glare of the sun which ruined a few of my photos. One interesting discovery was a small basement performance space called The Booth Theater. I also liked the small Danville River Front Park which had a nice fountain. I also saw two Danville murals. 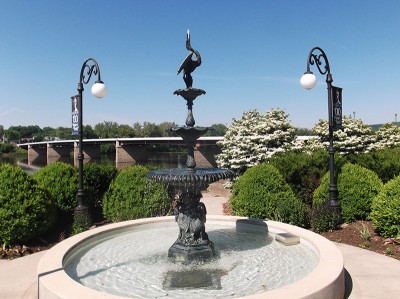 It was hard to find a restaurant which was open for breakfast, but I did find Edith’s Kitchen open. This was a fairly large restaurant with plenty of seating so I was able to get a table. I ordered the Fruity French Toast with blueberry and walnut syrup. This was three pieces of French Toast cut into six pieces. The blueberry syrup was very watery, like kool-aid, with blueberries and walnuts floating in it. I would have liked the syrup to be thicker, although it would have made the meal heavier. I used the bathroom which only had one stall. The Fruity French Toast and coffee cost me $10.45.

After breakfast I bought a copy of the local paper, The Press Enterprise, Sunday edition for $1.50. I had to go back to my car twice to get enough quarters for the vending machine. I can actually buy this paper at the local Wegmans since they carry many newspapers. Danville is only 50 minutes from Williamsport which is practically in the neighborhood given the distance between towns and cities in Central Pennsylvania.

I wasn’t very impressed by Danvlle and don’t see a reason to go back there any time soon. The next town to explore east on Route 80 will be Bloomsburg. I am particularly interested in the Bloomsburg Theatre Ensemble, one of the major theaters in the region. That trip will have to wait until after my vacation in San Francisco in two weeks.