Washington DC – Trip Into The City

Yesterday I made my tenth trip to Washington DC. As usual, this trip took place during the National Cherry Blossom Festival. This year the cherry blossoms were at their peak and it was a beautiful, sunny day. I expected it to be more chilly than it was, so I wore a sweater which made me too hot. For my San Francisco vacation I will need to buy a light sweater with buttons so I can remove a layer more easily.

I did not spend too much time planning this trip. My only goals were to visit the Adams Morgan neighborhood and Chinatown. Reading about San Francisco’s Chinatown made me want to explore Washington DC’s Chinatown, but the nation’s capital has a very small Chinatown.

I used the Metro to get to Adams Morgan. My previous notes on how to use the Metro proved useful and I managed to find my way. I bought single trip farecards for $2.75 and avoided overspending.

The Adams Morgan neighborhood is described and recommended in the travel guides to Washington DC. It is a colorful area of the city with many ethnic restaurants and fashionable boutiques. Still, it was not a particularly worthwhile place to visit since there is nothing to do except have lunch and do a little shopping. I actually arrived at Adams Morgan before most of the stores were open on Sunday, even after walking all the way from the Woodley Park Metro Station and across the Duke Ellington Bridge. So I spent about an hour photographing establishments on both sides of 18th Street and wandered down some of the other streets. 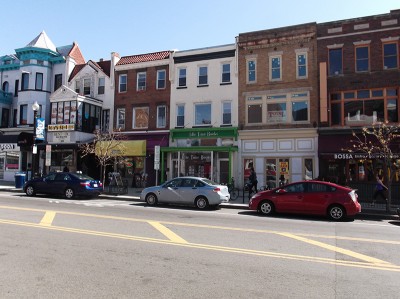 By 11:00 a.m. Idle Time Books was open so I made that my first stop. I bought the book, Smile When You’re Lying: Confessions of a Rogue Travel Writer, by Chuck Thompson. This seemed to be the perfect book since I love to travel. My travel writing is pretty boring, just like what this book is criticizing. I plan to write a novel about space travel entitled Offworld. It is going to be a boring piece of imaginary travel writing
unless I can think of a story.

By 11:30 a.m. Sakuramen Ramen Bar was open so I had lunch there. I picked this restaurant because I like Japanese culture and ramen shops are great for a really cheap meal. This restaurant is rather small and it filled up shortly after opening, but I was early enough to get a seat at the largest table. I ordered Sakuramen, their signature vegetarian ramen with corn, green onion, mushrooms, and nori. It was pretty good but only one cut above instant ramen. They only give you a soup spoon and chopsticks to eat with. Everyone was using chopsticks but I only used the spoon. Yes, I still have not learned how to eat with chopsticks even though I’ve bought some to practice with. This meal was only $11.00 but I left $15.00 with tip.

After lunch I went to a punk rock record store. There are actually two such stores in Adams Morgan, Smash Records and Crooked Beat Records, but Crooked Beat Records was late to open so I went to Smash Records. The selection of CDs was
small so I bought a CD of Washington DC heavy rock underground bands, Doom Capital. They also had some good old-fashioned vinyl but I did not want to carry an LP record all over Washington DC. I feel too old for punk rock record stores but most of the original punk rockers are dead now anyways. Punk rock will soon be old people’s music, golden oldies!

Although I only spent an hour or two at Adams Morgan, there was no reason to hang around. I took the Metro to Chinatown, which is on the Red Line at the Gallery Place Station. Gallery Place is a small shopping mall built over the station. The Verizon Center is also nearby. I took lots of photos of the Friendship Arch (the Chinatown gate), and a few recommended Chinese restaurants in the area. I also explored Gallery Place which is not much of a mall. I considered watching a movie at Regal Cinema but nothing good was playing. 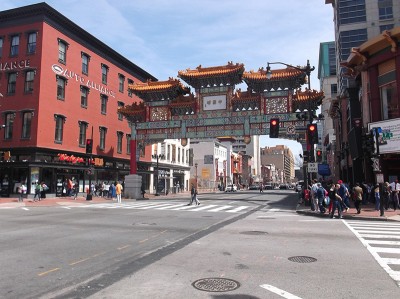 I was done with Chinatown by 1:30 p.m. so I walked all the way back to the National Mall and killed time at a few Smithsonian Museums. First I visited the National Museum of Natural History because it has been a long time since I’ve visited that museum. The dinosaur exhibit was being redesigned but I did get to see the Hope Diamond. Then I spent a brief amount of time at the Freer Gallery of Art and saw the Peacock Room again. And finally I went to National Air and Space Museum to kill several hours. At the gift shop I bought the book Robots in Space: Technology, Evolution, and Interplanetary Travel (New Series in NASA History) by Roger D. Launius and Howard E. McCurdy. This book is probably pretty boring but it was the most interesting title I saw. But as I was leaving the gift shop I saw they had Failure Is Not an Option: Mission Control From Mercury to Apollo 13 and Beyond by Gene Kranz which might have been a better book. 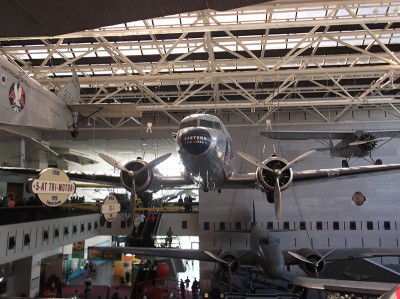 I should mention that our tour bus had a lot of trouble getting out of the city and we wound up driving around the Watergate complex and the Kennedy Center for the Performing Arts, an area I’ve never seen before.

This will probably be my last bus trip for this year because I will now be totally focused on San Francisco. I have decided to go to San Francisco twice. Once on my own and once on a package tour which will include side trips to Napa Valley and Monterey. Going twice will be very expensive so I will have to save all my money for San Francisco. I am almost ready to book my hotel and flight for the trip on my own.