As mentioned in my previous blog post, I waited until Sunday to attend the first Fall Foliage Weekend in Jim Thorpe because it rained all morning on Saturday. Sunday was very cloudy and a bit chilly. This was my second trip to Jim Thorpe. The Fall Foliage Festival and a special train excursion gave me enough reason to make another trip. Otherwise, there would not be enough things to do in that small town for a repeat trip. I followed the directions on the web site to park at the Mauch Chunk Lake Park. I think I arrived early enough to park beside the train station but I wanted to see Mauch Chunk Lake Park anyway. There was a trolley shuttle to take you into town. It was a considerable distance away from town but I did see the Switchback Trail in the woods.

The first thing I did was walk to the train station and buy a ticket for the Hometown High Bridge Train for $25.00. There was a train leaving right away so I was very lucky. This train ride was different from the Lehigh Gorge trip I went on during my previous visit. This train trip used a different track to head west, going through the small town of Nesquehoning, pass Lake Hauto and Greenwood Lake, to the Hometown High Bridge 168 feet above the Little Schuylkill River. It was an excellent opportunity to see yet another little section of Pennsylvania which was unknown to me. Basically this train ride was a two hour trip into the woods which are very beautiful in the fall. I mostly saw trees changing to a golden yellow, not many red leaves. The train moved very slowly so I could see the passing scene easily enough. Due to the extensive railroad industry that provided transportation during the Industrial Revolution, there are many freight train lines in Pennsylvania and quite a few of them are put into use for fall foliage excursion rides. The highlight of this trip was the Hometown High Bridge. The train stopped on this bridge so we could enjoy the spectacular view of the river gorge. I tried to imagine that I was a passenger on a train going through the woods on a trip to a Victorian era resort. It was a charming fantasy.

Back in town I proceeded to do a more thorough exploration of the shops and restaurants to fill in my custom travel guide on Jim Thorpe. First I entered Sellers Books and bought a collection of Russian plays, Eight Twentieth -Century Russian Plays published by Northwestern University Press. None of these plays are by Anton Chekhov, which is surprising, but I’m sick of him anyway. The book selection at this bookstore was very good and reflects very good taste. I could have bought many more books but I didn’t want to carry them all day.

Next I came across the Wheel Restaurant. This restaurant is easy to miss because the exterior looks like an antique store or a junk art gallery. The interior also looked like a gallery of artwork made from antiques and junk. There was a large cabinet radio and a film poster for Alfred Hitchcock’s Frenzy. The underside of the tables were lit by black lights and cool jazz played in the background. I was lucky to have lunch at this restaurant because they aren’t always open for lunch and you need a reservation for dinner. And they only serve dinner on a few days of the week. I ordered the Chicken Stuffed Ancho Chili which came with tortilla chips. Ancho is a mild chili pepper from Mexico. The Chicken Stuffed Ancho Chili was served with sour cream. It was really delicious and exotic but made for a very light meal. I loved the atmosphere of this funky little restaurant which seemed way too sophisticated for a small town. It is further evidence that Jim Thorpe is a hot tourist town which attracts a sophisticated set of visitors. Fortunately this meal was very affordable. 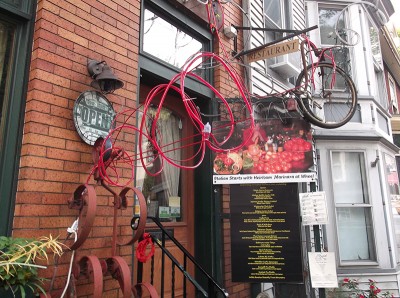 After lunch I wandered around the narrow, winding streets and stopped in at Mulligan’s, the Mauch Chunk 5 & 10, and the Treasure Shop. I didn’t buy anything at these stores because the selection of merchandise was very poor. Mauch Chunk 5 & 10 was a very old fashioned kind of store, a genuine 5 and 10. But I did spend some money at Soundcheck Records where I bought a jazz CD, Time Out by The Dave Brubeck Quartet. I don’t know much about jazz but I know this is one of the classic albums. I was inspired to look for some jazz after hearing cool jazz during lunch. I also bought a classic rock album, Bad Company for more 1970s nostalgia. Up on Race Street I visited Serendipity which I thought was an antique store, but they had more old books than anything else. I bought a Penguin Classics edition of The Rise of Silas Lapham by William Dean Howells mainly because the cover painting was appropriately Victorian for old Mauch Chunk. 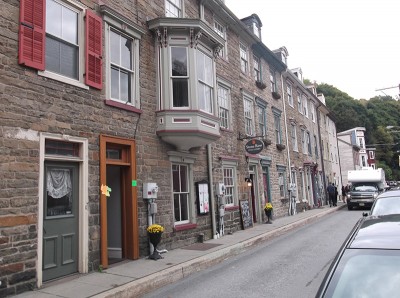 I saw three different horse drawn carriages on the streets of Jim Thorpe which added to its charm. I kept seeing them again and again since there aren’t many streets for them to travel on. The Fall Foliage Festival itself consisted of a few booths selling food and craft items near the train station. There were also many musicians playing music around the town. I bought a funnel cake and a cup of coffee. A funnel cake is actually a regional specialty associated with the Pennsylvania Dutch. It is usually served at carnivals and fairs. A funnel cake is batter cooked in hot oil and covered in powdered sugar, sort of like a doughnut in a more lumpy form. Anyway, this was a big mistake since it was far too greasy for me. I began to feel stomach cramps before I even finished the thing. Still, it was nice to eat funnel cake while listening to the music being played in the gazebo in Josiah White Park, the name of the small park next to the train station. In Williamsport, I would have considered this a shabby little street fair but it seemed very charming in Jim Thorpe. 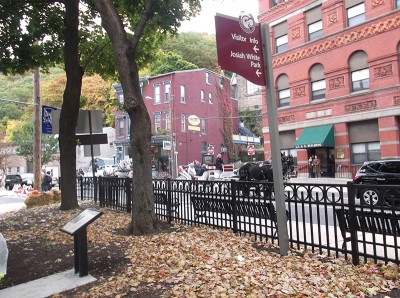 Eventually I ran out of things to do so I headed back to the Mauch Chunk Opera House and caught a shuttle van back to the Mauch Chunk Lake Park. I took some photos of the lake and used the rest room because the funnel cake went right through me. Unfortunately I think I have exhausted the possibilities of Jim Thorpe but there may be other small towns worth visiting for their Victorian charm like Bellefonte.