In Search of Henry W. Shoemaker

On Saturday I was planning on going to the Fall Foliage Festival in Jim Thorpe but the weather forecast indicated that it would be raining for most of the morning. So I put that trip off for Sunday and waited until the rain showers ended to make a short trip into Clinton County. I’ve recently read the book Country Towns of Pennsylvania by Marcus H. Schneck and the chapter on Woolrich mentioned Henry W. Shoemaker.

Henry W. Shoemaker was a Victorian newspaper publisher and writer. His literary effort was mostly devoted to wandering around Central Pennsylvania gathering the folk tales of the region’s early history. He collected Indian tales, ghost stories, local legends and myths, pioneer lore, lumber camp stories and the tall tales of hunters. Shoemaker’s work is a rich treasure trove of Central Pennsylvania lore. This really excites me because I’ve longed for a mythology to form the basis of a regional culture. Seriously, I’ve been searching for this very thing because I understand how the psyche loves to create myths to enshrine experiences. This is something I have learned from reading the work of Jungian psychologists like Stephen Larsen, The Mythic Imagination: The Quest for Meaning Through Personal Mythology or Joseph Campbell, The Hero with a Thousand Faces.

This book is interesting enough as a biography since I can’t think of any other extensive biography of a Victorian gentleman from Central Pennsylvania. But it also has some interesting material on the early conservation movement, the formation of the state parks and state forests, Victorian industrialization, and the effort to preserve regional heritage. One interesting observation is how contemporary Pennsylvania tourism celebrates our industrial heritage; coal mines, lumbering, and railroads, while neglecting the natural wonders and pioneer folklore favored by Shoemaker.

Fortunately there are still traces of Henry W. Shoemaker to be found west of Williamsport in Clinton County. First I visited the Restless Oaks Restaurant, a rustic establishment named after his estate. I don’t think this restaurant occupies the site of his former estate because the old house still exists only a short distance away. Restless Oaks Restaurant is a very distinctive restaurant with an Indian totem pole outside. Inside the decor was very impressive with bear skin rugs on the wall, stuffed deer heads, rifles, huge saw mill blades, and a wide variety of other rural artifacts. It looked like a fancy combination of Country Cupboard with a mountain resort. Restless Oaks Restaurant is apparently a shrine to local culture as described in Henry W. Shoemaker’s books. I ordered a cheeseburger which was quite good. I’ll have to visit this restaurant again because I’ve heard they have a gift shop where they sell Shoemaker’s books, but I didn’t happen to see that. 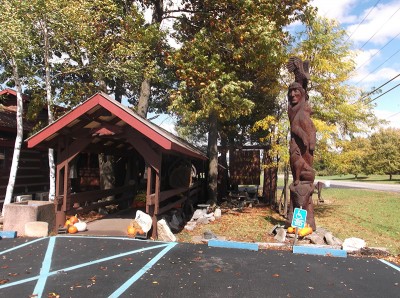 After eating at Restless Oaks Restaurant I drove by the actual Restless Oak estate in McElhattan and took a few photos from the car. The place looked deserted. I’m not sure if it is a private residence or if it is being preserved as a museum. Just finding the place required a careful comparison of an old photo to the Google Street View. 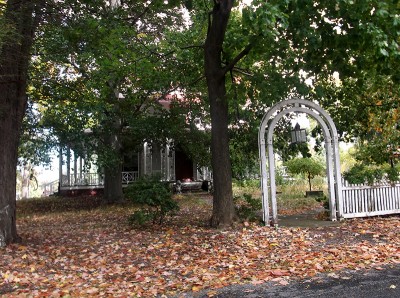 My final goal was to visit the grave of Henry W. Shoemaker in Lock Haven at Highland Cemetery. This was a good excuse to visit Lock Haven, an old river town best known for Lock Haven University and the Piper Aviation Museum. I’ve always considered Lock Haven a remote, dull little town, but it did seem more charming after my trips to the Poconos. I had a better eye for its good qualities. You can get a fantastic view of the West Branch of the Susquehanna River from the dike. The river is surrounded by mountains so it almost looks like a lake. Lock Haven has many Victorian mansions and old buildings like you see in Hawley PA. I spent a few hours exploring the town and then drove around trying to find Highland Cemetery. This proved to be quite difficult even though I had actually driven pass the right road on my way into town.

Eventually I found the deserted Highland Cemetery which is on a steep hill overlooking Lock Haven University and the Susquehanna River. The view was spectacular but I had to climb to the top of the hill to find the grave of Henry W. Shoemaker. The fall foliage and desolate hill top made the experience slightly spooky. Shoemaker’s tombstone was surprisingly modern and conventional. I was expecting a small monument. I should have brought flowers to leave at his grave. Before I left I also discovered the mausoleum of the Piper family, William T. Piper was the “Henry Ford of Aviation”. 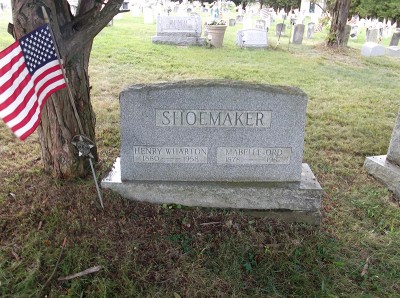 On the way home I passed Spook Hollow Auto Wreckers. Now that I have discovered the work of Henry W. Shoemaker I shall read some of the ghost stories which gave Spook Hollow its name.