Poconos In The Fall

Yesterday I made my eighth trip to the Poconos and the first in the fall season. Although the manhunt is still going on, there is actually just a small area that you need to avoid. I saw no evidence of the manhunt during my road trip. On this trip I drove along Route 6 again and visited a few of the same towns because my initial trip was not well researched and cramming three towns into one trip causes you to miss a few things. For this trip I visited Honesdale, the Zane Grey Museum, and Milford with the emphasis on Milford.

I followed my usual route; east on I-180, east on I-80, north on I-81, and then east on Route 6. Unfortunately I missed the exit for Route 6 north of Scranton and got on I-84 East instead. I was trying to drive without my GPS. Eventually I pulled over to the side of the road and turned on my GPS which led me to Route 191 North to Honesdale. I passed through Lake Ariel and the village of Hamlin. 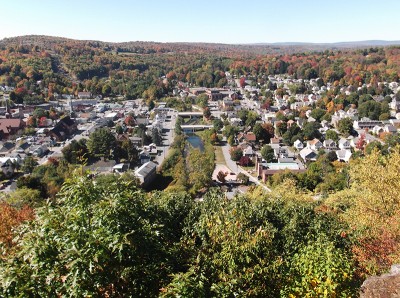 My first goal was Irving Cliff, a park which overlooks Honesdale. I found Cliff Street easily enough but Google Maps does not have street view for this road so I drove pass Gibbons Park Road and had to turn around before I found it. Gibbons Park Road was the steepest road I’ve climbed this summer and it was very narrow so you’d have a real problem if you had to pass another car going downhill. However the view from the park was spectacular with most of the town visible below. There was a Hollywood type sign on the hill and a 50 foot electric framework for a Christmas Star and Easter Cross. I only saw a few other people on the hill.

After making my way back down the hill I managed to find my way to the parking area behind the railroad, near the visitor’s center. Since it was a bright, sunny day I wandered around town taking better photos than I got on my previous trip when it was cloudy. I went to Main Street Books again and bought a hard cover book, Amsterdam by British writer Ian McEwan. Amsterdam will be my next international travel destination but it will be years before I can afford it. I had lunch at Branko’s Patisserie Du Jour, a charming French cafe. I ordered a Patisserie Chicken “Francaise” Grilled free-range chicken breast, citrus lemon, white wine, caramelized Vidalia onions, fire roasted red peppers, Patisserie garnish and a cappuccino. I thought the sandwich was too much like a salad on a baguette but it was pretty good. Patisserie Du Jour also had many French pastries for sale in glass display cases. This cafe is a fine example of how the Poconos can be a little sophisticated and upscale since they cater to wealthy tourists from New York City.

After lunch I proceeded along Route 6 to Hawley but went pass Hawley and continued straight on Route PA-590 to reach the Zane Grey Museum. The drive along 590 was very scenic. The fall foliage in the Poconos is almost at its peak already even through the trees have barely started to change color in north central Pennsylvania. Just driving along a road through the woods is very beautiful this time of year. Route 590 did have many twists and turns and I got stuck behind a slow moving car. I also drove pass the Woodloch Empire, a resort which appears to have a variety of facilities along Route 590. 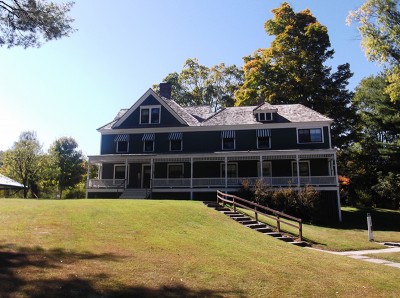 Zane Grey was a writer. He wrote many westerns which were best sellers in the early 1900s. I have not read many westerns but I bought a few Zane Grey novels after I read about this museum in the outdated travel guide The Pocono Mountains. I haven’t finished reading any of his work yet. There was nobody in the museum when I arrived so I explored the exhibits on the ground floor. I could hear someone walking around the second floor. The exhibits were quite similar to the style of exhibits I saw at the Edgar Allan Poe National Historical Site in Philadelphia; lots of information boards and telephone headsets for recorded narration. Both of these museums are run by the National Park Service. I saw Zane Grey’s study with many bookshelves filled with old books. Before I left I bought a Dover Publications copy of his first book Riders of the Purple Sage when a park ranger finally showed up at the cash register. Outside the museum I could see a wide expanse of the Delaware River and the Roebling Bridge which leads to New Jersey.

My final destination was Milford Pennsylvania which is right on the border with New Jersey, although it is the Delaware River which separates the two states. I’ve done a bit more research on Milford so I had a list of things to see. I parked near the RiteAid convenience store and pharmacy which is much closer to Broad Street, the heart of town. I bought two local newspapers at RiteAid, The Pike County Dispatch and The News Eagle, both of which had front page articles on the manhunt. I forgot to mention that I bought a copy of The Wayne Independent in Honesdale. 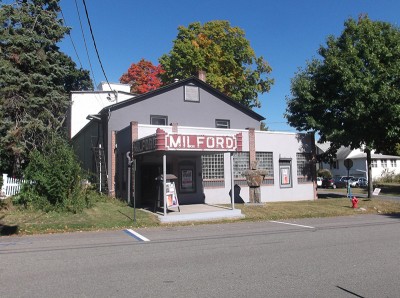 I then walked up and down Broad Street taking better photos but I did have three new establishments to find; the Milford Theatre, Fretta’s Italian Food Specialties, and the Pike County Historical Society (aka The Columns museum). Those are all places I missed on my previous trip because I did not do my homework. I did have to hurry to visit The Columns museum because it closes at 4:00 p.m. and I didn’t get there until 3:00 p.m. This museum of the Pike County Historical Society was slightly better than I expected because they had some neat exhibits. Their main attraction is a blood stained flag which was used to cradle the head of Abraham Lincoln after he was shot. But they also had an exhibit on turn of the century summer camps in the Poconos and an exhibit on the philosopher Charles S. Peirce. I found a stuffed black bear which was amusing. Recently a hiker in New Jersey was attacked and killed by a black bear so you do need to fear these critters.

I stopped in at Fretta’s Italian Food Specialties and bought four slices of cheesecake. I also had a bottle of something in my basket but it was missing when I got home. I assume they overlooked that item in my basket and did not charge me for it. Before I went home I had dinner at the Apple Valley Family Restaurant. This is one of those large operations which appear to be an attraction in its own right. In addition to the restaurant, there were many shops in rustic cabins and a duck pond. The food portions at Apple Valley Family Restaurant are enormous so I wisely only ordered an appetizer, the Shrimp Alexander. Three jumbo shrimp, prosciutto, roasted red pepper strips and mozzarella wrapped in a puff pastry. Served with basil and roasted red pepper pesto sauce. This was fantastic and almost a meal in itself. I also ordered dessert, deep fried apple pie, which was enormous. I couldn’t even finish this dessert since it was enough for a meal in itself.

I’m glad I made this trip because the scenery was incredibly beautiful with flaming foliage that rivals anything seen in stock photography for the fall season. And I enjoyed good food at distinctive restaurants. More importantly, I advanced my knowledge of the Poconos region. Even if I never move to the Poconos, it is still close enough for weekend road trips. I also gain a little more appreciation for the things that makes Pennsylvania an attractive vacation destination.