Today I made my seventh trip to the Poconos to do some antique shopping. I’m not particularly interested in antiques. Usually you will find better junk at a yard sale. But I did want to see if I could find any old Poconos resort memorabilia. The primary purpose of this trip was to drive a stretch of Route 611 and see some small hamlets; Tannersville, Scotrun, Swiftwater, Mount Pocono, and Tobyhanna.

First I drove all the way to Stroudsburg and visited an establishment which I overlooked on previous visits; the Olde Engine Works Market Place. Hundreds of dealers have booths in this old machine shop. I browsed through a lot of bad art work, metal signs, old books, VHS tapes, and a wide assortment of bric-a-brak. I did see some old typewriters which would be cool as decoration for a writer. As usual I had trouble finding something that I considered worth buying. Eventually I settled for an old science fiction hard cover book, Bodyguard and Four Other Short Novels from Galaxy edited by H.L. Gold. I also bought a wooden plaque with a picture of The Indian Queen Hotel, Early 1800s. This was the only item I saw which reflects the area’s long history as a popular destination. 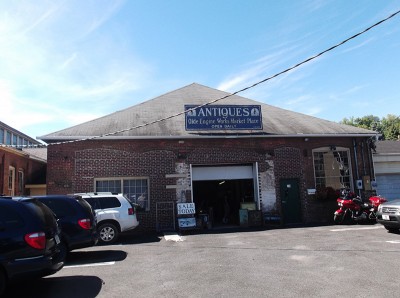 I then began my long drive north on Route 611. There are many establishments along Route 611 which seems to be one of the major commercial strips in the Poconos. I’m not sure if you can say there are any cities or towns along Route 611, just small named hamlets. I don’t think any of these places have a downtown where you can walk around, although Mount Pocono had crosswalks across Route 611.

My next stop was Pocono Peddler’s Village Antique Mall on Route 611. This antique mall was quite similar to the Olde Engine Works Market Place. Again I browsed through many dealer booths without much enthusiasm. A lot of the nicer items were locked away in glass cases but I only saw a few paperweights which looked interesting. There are a lot of books at these antique malls but even the books tend to be shabby. The books are either soiled or the bottom of the barrel mass market crap. Eventually I found a small panther statuette which seemed sufficiently unusual. 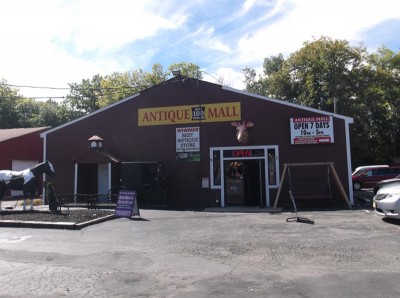 The next establishment I stopped at was Smuggler’s Cove where I ate lunch. I ordered Jumbo Shrimp with a side dish of coleslaw and a baked potato. For dessert I had a slice of cheesecake from Pocono Cheesecake Factory. This meal was expensive, $30.00, and barely a cut above anything you could buy at a grocery store. In contrast to my dinner on the Tioga Central Railroad, which was fantastic, this meal was a step back to unimpressive restaurant fare.

I was going to stop at Pocono Cheesecake Factory but I drove pass it because I wasn’t feeling hungry. And I was going to stop at the Candle Shoppe of the Poconos but I must have missed it. I did see many other establishments of interest like Sanofi Pasteur, a major employer, the desaki Japanese Restaurant, and the Scotrun Diner. Unfortunately, I can only eat one meal on a trip so there isn’t much to do on a commercial strip filled with restaurants. I bought gas near Tobyhanna but I didn’t see any sign of the famous Tobyhanna Army Depot. I probably should have stopped at Mount Pocono and explored the town but I followed my original plan too closely.

On the drive back home I saw my first black bear in the wild! I saw a black bear run across Interstate 80 a few cars ahead of me. Both lanes of cars applied their brakes and avoided hitting the bear. I also saw three deer gathered by the side of the highway. I saw more wildlife on Interstate 80 than on the train ride the other day.

With this trip I have explored all the major roads and towns of the Poconos. I could make more trips to the Poconos to visit different establishments; other restaurants and stores, but it will get a little repetitive. I might want to visit the Poconos in the fall to see the fall foliage.

One Response to Poconos Antiquing