I spent the second day of the Labor Day weekend in caves. It was raining on
Sunday but this does not matter if you are going to be inside caves. But I don’t
like driving in the rain. For this trip I had to drive west, deeper into the
heart of Central Pennsylvania, to some caves near State College. I visited
Indian Caverns, and Lincoln Caverns because it is a short drive from Indian Caverns. I was particularly eager to see Indian Caverns because I thought this might be the Indian caves we visited when I was a child. I’m pretty sure this was the place because they had Indian blankets for sale. We had Indian blankets and an Indian drum for years and years after our cave trip. The other possibility was that we went to Indian Echo Caverns, but it makes more sense that we stuck to Central PA.

I’ve never been to State College so that may be a good city to visit in the
future. Bellefonte may also be a cool little town because it is known for its
Victorian architecture. I don’t drive west very often so I’m still unfamiliar
with the highways in that direction. Pass Lock Haven U.S 220 South merges with
Interstate 80 in a way that often throws me off. I used my GPS to navigate on
this trip. For the caves I had to use GPS coordinates so I learned how to enter
them into my TomTom XL 340S. I also printed out cheat sheets because the GPS
never tells you what street to look for. For example, it will tell you “Right
turn ahead” long before you reach the target street and then “Turn right and
take the highway” but it won’t tell you its Route 45 West you should be on. So
it is crucial to have some idea where you should be going. I did notice that it
warns you when you are speeding and it gives the distance to the next turn.

I saw some great scenery on the drive to the caves even though it was
raining. There was a lot of mist around the mountains. I also saw a lot of
farmland and fields of corn. Somewhere along the highway you are tempted to take
your eyes off the road because there is a vast valley that you can see below.
Unfortunately there is no place where you can pull off the road to enjoy the
view.

Indian Caverns has a curious rounded building built into the mountainside.
You have to cross a rickety bridge over a creek to get to it. It is located in
the woods and has a very rustic look. I arrived at the cave around 10:30 a.m.
but I had to wait a half hour for the 11:00 a.m. tour. The gift shop had many
Indian themed gifts which were tempting but I bought a DVD Pennsylvania
Caves and Caverns, which lists eight caves. I have been to five of those
eight caves. Fortunately they also had a restroom which I needed after the two
hour drive. I passed the time leafing though a travel guide to the
Juniata River Valley. The only thing I saw of any interest to me was Lewistown, a
town where my sister used to live when she found a job there. Later at Lincoln
Caverns I found more interesting brochures like one for the Flight 93 Memorial
and the 2014 Central PA Visitor’s Guide which is devoted to State College but
includes some Williamsport attractions. 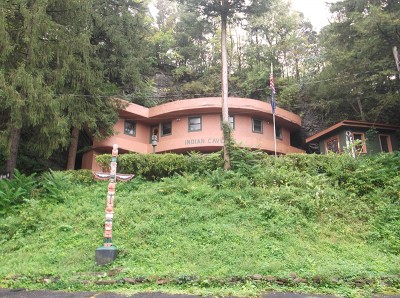 When the tour began at 11:00 a.m. I was the only person in the tour group but
later a few other people joined the tour after we were half way through the
caverns. There was the usual business of turning off the lights to show us how
pitch black it was without the light. I am likely to confuse this cave tour with
the Lincoln Caverns which I visited shortly after, but I remember that this cave
allows Boy Scouts to stay overnight in the cave, without lights, to earn merit
badges. There are no bats in the caves because all the bats are dying from
White-Nose Syndrome. 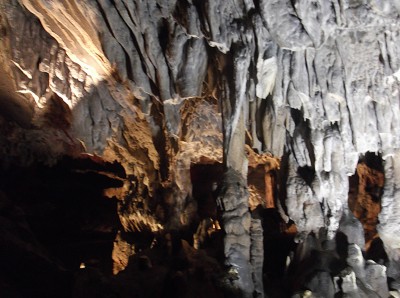 It was a short drive to the next cave, Lincoln Caverns near Huntington PA.
There are actually two separate caves to see here; Lincoln Caverns and Whisper
Rocks. The gift shop had a large selection of souvenirs and I bought a chunk of
polished ocean jasper for $15.00 before I left. As I mentioned before, they had
a wide selection of free brochures including brochures for show caves all across
America. 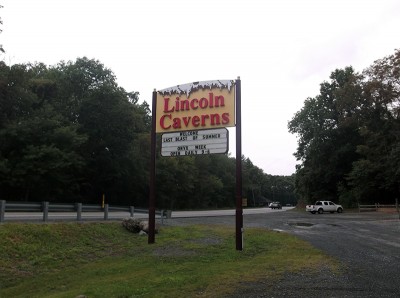 There were more people in my tour group at the Lincoln Caverns. It was
drizzling so I was glad to get into the caves. I brought along my light jacket
because the temperature is around 50 degrees Fahrenheit in these caves. The
Lincoln Caverns had some steep steps and narrow passages. I managed to take a
lot of decent photos in these caves. At one point the tour guide turned out all
the lights to show us the pitch black. This is part of every cave
tour. But she didn’t leave the lights off for long. There was a short uphill
climb to reach the other cave system, Whisper Rocks, which has its own door. The
two caves are not connected so we had to go back out in the rain to reach the
other one. There were many spiders hanging out at the cave entrance, over the
door, and some of the kids got a little hysterical over that. In this cave I saw
some excellent examples of flowstone. Yes, I have picked up some of the cave
lingo after this trip. 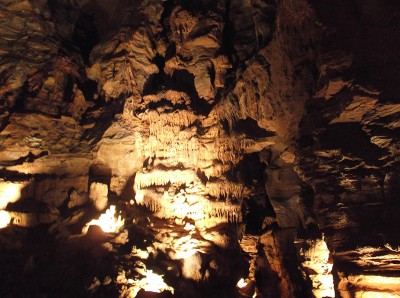 I was really starving after leaving Lincoln Caverns but unfortunately there
are no places to eat on U.S. 220 North. I drove pass a little diner that looked
interesting but it was raining too hard to stop. I didn’t eat anything until I
got home at around 4:00 p.m. 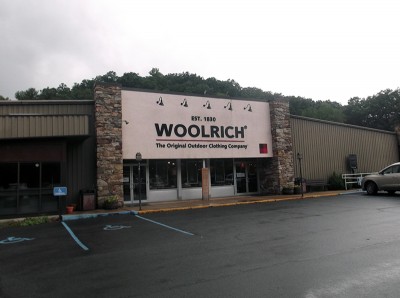 Before I went home I did manage to squeeze in one other side trip. I visited
the Woolrich Flagship Store and Outlet in Woolrich PA. It was slightly difficult
to reach because there was a detour around some road construction. Woolrich PA
is just across the Lycoming County line in Clinton County so technically it is
in my neck of the woods. Towering evergreens line the road into town. There are
attractive ranch houses along the street so the town almost looks like a summer
camp with houses instead of cabins. Woolrich sells expensive sportswear and
outdoor clothing in red plaid. It is the perfect fashion for Pennsylvania’s
woodsy outdoor recreation. I’ve been hiking wearing the same clothes that I wear
at the office so I need to buy some outdoor clothing. Woolrich clothing should
be ideal since it shows local pride. I only bought a short-sleeve plaid shirt
because their prices are steep, even with the discount. That shirt sells for
$55.00 but I got it for $29.99. I also bought a black bear teddy bear wearing a
red plaid Woolrich jacket since it is a fine example of Pennsylvania kitsch.
Lincoln Caverns actually had a brochure for the Woolrich Original Outlet Store.
It is considered a tourist attraction in its own right and there are billboards
for the store along Interstate 80. The store did have an attractive interior
with an indoor waterfall and old Woolrich advertisements from the 1950s. There
was a table with travel guides to Williamsport and Pennsylvania but I already
have all those.