On Sunday I visited Jim Thorpe PA, the most charming town I’ve ever seen. Jim Thorpe is known as the “Switzerland of America” and the “Gateway to the Poconos”. The town was originally named Mauch Chunk, but bizarrely renamed itself after a sports legend in exchange for the honor of being his final resting place. I found Jim Thorpe to be the ideal combination of Pennsylvania scenic splendor and Victorian architecture. To describe the town of Jim Thorpe as picturesque doesn’t do it justice, it is the essence of the picturesque. Mauch Chunk is ideally picturesque.

I was going to visit Jim Thorpe on Saturday but the weather was bad, too overcast and dreary, so I waited until Sunday. Fortunately Sunday was a beautiful day with bright sunshine and just a few clouds to create patches of shadow and light. It was perfect weather for maximizing the effect of the scenery. I arrived in Jim Thorpe around 9:00 a.m. so I had two hours to take photos before the attractions opened. What makes Jim Thorpe so picturesque is its many fine examples of Victorian architecture set against forested mountains that fill half the sky. There are two Victorian mansions on a hill overlooking the town and massive stone buildings. Broadway is a street lined with boutiques and other establishments housed in extraordinary architecture. The streets were very narrow and every building looked quite distinctive creating an impression of a very cozy, magical dream town. Jim Thorpe has been voted one of the most beautiful small towns in America. 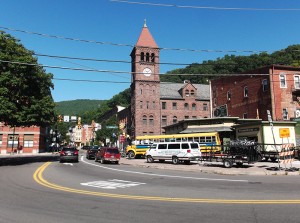 I parked in a large parking lot next to the Lehigh Gorge Scenic Railway. It cost me $6.00 to park there for the day. I walked pretty far up Broadway to the Church of the Immaculate Conception, which is on West Broadway, and took a lot of photos to complete my custom travel guide. I didn’t quite complete my research before making this trip so I need lots of photos for my notes. On the way back downtown I stopped in at Strange Brew for some iced coffee and picked up a brochure for the Lehigh Gorge Scenic Railway. I also went into Dugan’s Store and bought a copy of the local paper, the Times News. I don’t think I had established what the local paper was called so this was important. After returning to my car to stash the newspaper it was around 10:15 a.m. My walk around town took quite awhile because I went up the Packard Hill to photograph the mansions and I walked down Race Street too.

I bought a ticket for the 11:00 a.m. excursion of the Lehigh Gorge Scenic Railway. I paid $17.00 for the open air car. A branch of the Pocono Mountains Visitors Bureau is located in the Mauch Chunk Depot so I went in there and picked up even more brochures for the Poconos. I have a huge stack of brochures now. I was especially glad to find some maps for the state parks in the area. Beside the Mauch Chunk Depot is a small park with a massive coal bolder and a gazebo. I took photos of everything.

One of the things that makes Jim Thorpe seem like a perfectly preserved Victorian town is its train station, which is located on the east end of downtown, with a passenger train stationed there. The Lehigh Gorge Scenic Railway is run as a tourist attraction with scenic excursions. There are many excursion trains in Pennsylvania. The Strasburg Rail Road is probably the most famous because it takes you through Amish country. I visited the Strasburg Rail Road in 2011. Next month I’m going on the Tioga Central Railroad Dinner Train, a trip offered by a local travel agent. My ride on the Lehigh Gorge Scenic Railway took me through the Lehigh Gorge State Park, or at least the Glen Onoko part of the park, so I saw the bike trail and the Lehigh River rapids. There were also fantastic views of the mountains. The entire trip took an hour so that was an hour of relaxation before I resumed my tourist activities. 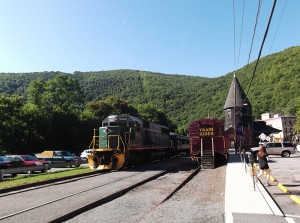 After the train ride I headed up the hill for a tour of the Asa Packer Mansion. Next door to that mansion is the Harry Packer Mansion, which is run as a bed and breakfast and served as the model for Disney World’s haunted mansion. So it is a pretty awesome old mansion. Before the tour started I got to sit under the veranda of the Asa Packer Mansion. This was a surprisingly enjoyable experience because it was so damn picturesque! Before me was a plot of yellow daisies. An American flag hung over that. And the view down the hill of downtown Jim Thorpe was dominated by a massive stone clock tower, a civil war monument, with a huge mountain in the background. This was the view enjoyed by a Victorian millionaire and I got to see it virtually unchanged. The tour of the mansion was also amazing. The furnishings of the mansion are perfectly preserved and display Victorian elegance at its finest. This tour was my favorite part of the trip because it allowed me to form a perfect fantasy of Victorian life. I got to see lavish rooms; a library, a parlor, a dining room, a kitchen, bedrooms, and old fashioned bathrooms all done in fine woods like mahogany and rosewood. This was truly a vision of another era set in the familiar scenery of the Pennsylvania mountains. Unfortunately no photography was allowed inside the mansion or I would have photographed the shit out of it. 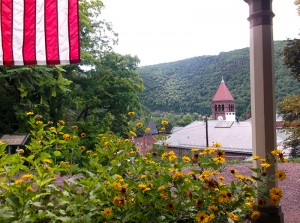 After the mansion tour I walked back up Broadway to West Broadway and entered the Old Jail Museum. The Old Jail Museum is where the Irish coal miners known as the Molly Maguires were hung. The tour through the Old Jail Museum was led by a young teenage girl but she seemed very knowledgeable. We were led though the warden’s quarters, the cell block, and the dungeons. There was a gallows set up in the cell block for hanging prisoners. The entire building looked pretty decrepit, dreary, and spooky. I bought The Molly Maguires film on DVD in the gift shop. This film stars Richard Harris and Sean Connery and was filmed in Jim Thorpe and the Eckley Miners’ Village. The DVD cost me $29.95 which seemed a little expensive for such an old movie, but I suppose it supports the museum. I have not watched the film yet. I probably won’t like it. 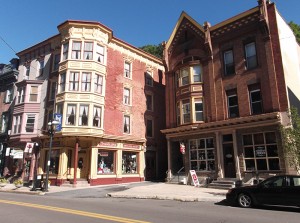 I was ready for some shopping after all those tourist attractions. Jim Thorpe has many interesting boutiques which makes it better than a shopping mall. First I went to Sellers Books because I always have to visit a bookstore. This bookstore fills the lower floor of a Victorian row house. I made a real find, Lehigh Gorge Trail Guide, a book on the trails in the Lehigh Gorge State Park and even the Hickory Run trails. I plan to do some hiking in the Lehigh Gorge State Park as part of my exploration of the Poconos. I returned to my car after buying the book because I now had a DVD and a book plus some brochures to carry around. I checked my cash and found I was already practically broke so I used the ATM at the Mauch Chunk Depot to withdraw $60.00 more from my checking account.

The next store I visited was the Emporium of Curious Goods which specializes in the arcane and the occult. I especially wanted to visit this store because I’m slightly interested in the occult, mostly shamans or visionaries. I didn’t find anything I particularly wanted to buy in this store but I settled for the book Haunted Cemeteries by Tom Ogen. I was looking for a graphic novel, The Victorian Horrors of Old Mauch Chunk #1, which I came across while researching this establishment, but I did not see it anywhere. I was pretty hungry by then so I entered the Bear Appetit Cafe. My research on Jim Thorpe was so incomplete that I didn’t have a single restaurant in my notes so I took a chance on this place. They did not appear to be crowded like some other places I saw. I ordered sweet potato fries, a crab cake sandwich, and a mountain dew. The sweet potato fries were excellent and the crab cake sandwich was pretty good. I finished everything because I had not eaten all day. That meal only cost me $15.00 with a generous tip so it was very affordable. A record store was right next door, Soundcheck Records, so I went in there and bought a CD of Three Dog Night’s Greatest Hits. Three Dog Night is an old band from the 1970s. They are a little before my time but that gives them a curious nostalgic appeal without being associated with any actual memories. There is a lot about the Poconos which harkens back to the 1970s when the honeymoon resorts were very popular. I have formed a sort of fantasy of the Poconos as a semi-rustic Pennsylvania dream world stuck in the summers of the 1970s. I use that fantasy as my inspiration for this project.

The final thing I did downtown was visit the Mauch Chunk Museum and Cultural Center, basically a historical society museum. After watching a short film on the town’s history I went on a self-guided tour of the exhibits which were a bit cluttered so you had to spend some time picking out details. By then it was almost 4:00 p.m. and I knew most of the attractions and shops closed early at 5:00 p.m. on Sunday so I decided to call it a day. There isn’t a whole lot to do in this small town so you don’t need more than a day to visit Jim Thorpe, but I may find more things to do after more research.

Before heading back home I did drive out to East Mauch Chunk and found the Jim Thorpe Memorial, the final resting place of the sports hero who lent his name to the town. Actually, his widow lent his name without getting the rest of the family’s permission. I think that entire arrangement was kind of strange and sad.

In conclusion, I thought Jim Thorpe was a magical place, a dream town. The place was crawling with bikers just like at Wellsboro. Bikers must have a thing for quaint small towns. I did see some Susquehanna Trailways buses drive through town which was an interesting local connection for me.