My 9th Trip To Washington DC

Yesterday I made my 9th trip to Washington DC. I have to admit that I was not very enthusiastic about this trip. I was also a little bored on this trip. I think I’m guilty of checkbox tourism, checking things off on a list of popular attractions. Some tourists seek out the “hidden gems” and a genuine local experience while other tourists do only the highlights mentioned in the travel guides. I like to find obscure establishments through intensive research or base my activities on my serious pursuits and interests. For example, finding theater buildings is worthwhile because I like to write plays. And I like to visit bookstores because I love books.

The bus arrived in Washington DC around 10:00 a.m. The bus driver was quite knowledgeable about Washington DC so he tried to point out all the major attractions as we passed them by. My research on the city is fairly complete so I don’t need such general information. We were dropped off in front of the National Museum of Natural History. The first item on my itinerary was the Corcoran Gallery of Art. I was considering a stroll though Georgetown for this trip but the weather was calling for rain so I decided to stick to museums. The Corcoran Gallery of Art is just to the left of the White House so I was able to take some great photos of the south side of the White House along the way. The scaffolding is gone from the Washington Monument so I got some great photos of that as well. 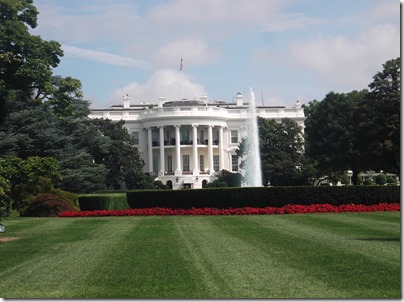 Fortunately, admission to the Corcoran Gallery of Art was free on this Saturday. I didn’t even need a ticket. This art museum is fairly small with only two floors and thirty galleries. The most famous artwork I saw was a Chairman Mao portrait by Andy Warhol. I was going to have lunch at their Muse Café but it looked like they only sold coffee and some pastries. The museum store was closed so I couldn’t buy anything. This was probably the cheapest bus trip I’ve ever been on since I spent very little money.

The next item on my itinerary was the National Archives. The big draw at the National Archives is the Declaration of Independence, the Constitution, and the Bill of Rights which are on display in the Rotunda. I was not particularly interested in seeing the original documents enshrined in this building, but it would be a shame to visit Washington DC repeatedly without seeing this important exhibit. You have to go through security to enter the building which proved to be a little annoying since my pockets were full of electronic devices, small change, keys, etc. Absolutely no photography is allowed in the National Archives but they will allow you to bring in a camera. You just can’t use it. In addition to the Rotunda, there is a public vaults exhibit with other historical documents on display. The only really interesting thing I saw was an exhibit on modern technology which had many motherboards and obsolete media formats encased behind glass. The My Archives Shop had many books for sale but I didn’t find anything I would want to read. Perhaps my low enthusiasm level made me reluctant to buy anything. 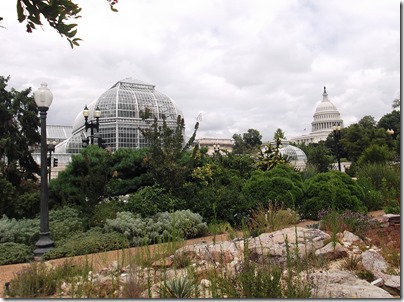 The final item on my agenda was the United States Botanic Garden. This was my favorite part of this trip but the Botanic Gardens should probably be low on your list if you are visiting Washington DC for the first time. I walked though the National Garden and then explored the Conservatory. I liked the indoor jungle and tried to take every conceivable photo through the lush foliage. I also visited Bartholdi Park which features a massive Bartholdi Fountain. The Capitol building is nearby so I tried to get the Capitol building dome in as many of my photos as possible. You can see the dome through the foliage at many spots in the Botanic Gardens so it is an excellent location for taking some classic photos. 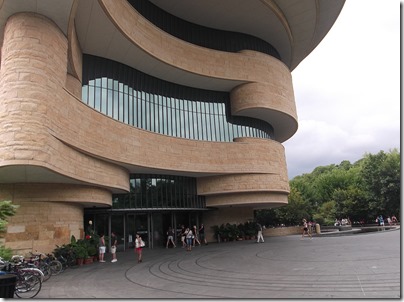 Incredibly enough, I still had plenty of time to kill so I visited a few more museums. I had not planned on visiting the National Museum of the American Indian but it is right next to the United States Botanic Garden so it was convenient. I must say that I found the National Museum of the American Indian a little disappointing. It’s primary focus seems to be on contemporary tribes. The exhibits were pretty thin on the history of the American Indian. There was not an extensive collection of Indian artifacts. Frankly, I think even the Pocono Indian Museum might be a better museum. Where were the Indian Chief feather head dresses, the buckskin clothes, the teepees, the peace pipes, the scalps, the drums, the tomahawks, the arrows, etc? I did buy a book in the gift shop, “The Shawnees and the War For America” by Colin G. Calloway. The Shawnees used to live on the Delaware River which is why there is a Shawnee on Delaware town in the Poconos. I’m not very interested in Indians except for Shamanism. Shamanism is the universal and fundamental expression of spirituality. The National Museum of the American Indian did not have an exhibit on Shamans and its collection of books on the subject was not very good. Even my meal at the Mitsitam Café was disappointing. I only had a buffalo burger, a parfait, and a bottle of Minute Maid but that cost me over $16.00.

I spent considerable time in the National Museum of the American Indian but I still had over an hour to kill so I decided to visit the National Museum of American History. I have been to this museum on a previous trip but I was a bit rushed and did not see everything. This time I saw the exhibit on the American Presidency and the gowns of the First Ladies. I think they made improvements to Julia Child’s Kitchen because the view into that glass enclosed space was better. I saw the original Star Spangled Banner Flag again.

With this trip, I am pretty much done with the National Mall. But I’m not quite done exploring Washington DC. I should consider the United States Capitol Visitor Center for a future trip. The Folger Shakespeare Library and a tour of the Kennedy Center would better serve my interests. And there is still one more art museum to see, The Phillips Collection. I also want to visit Georgetown and the Adams Morgan neighborhood.