My fifth day in Rome was a Thursday and my goal was to visit the Capitoline Museums since it was closed on the day I first tried to visit it. I took subway line B in the direction of Laurentina to Colosseo. I walked along the Imperial Forums and saw Trajan’s Column. I definitely saw the Temple of Mars Ultor because I have a photo of it. I walked pass the Monument of Victor Emmanuel II and climbed the Capitoline Hill cordonata to the Piazza del Campidoglio. I saw the equestrian statue of emperor Marcus Aurelius of course and the two massive ancient statues of Castor and Pollux. I had to buy a ticket but the ticket line was very short.

One of the first things I saw within the Capitoline Museums was the fragments of Constantine’s colossal statue. This is one of the iconic images of Rome used for the cover of my book on the history of Italy. I also saw the original bronze equestrian statue of Marcus Aurelius,  the bronze she-wolf nursing Romulus and Remus, the bust of Commodus as Hercules, the famous statue of the boy with a thorn (Spinario) which was part of a special exhibit so no photos, and the statue of Pope Innocent X. 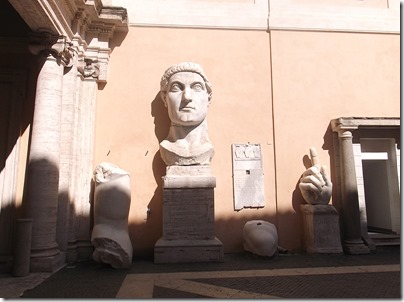 I almost didn’t make it into the Palazzo Nuovo because I could not find the underground passageway. I had to ask someone on the museum staff where it was. In this wing of the museum I saw the Dying Gaul sculpture, the colossal statue of Oceanus, and the Egyptian room just off the main courtyard with two monkeys, a granite crocodile and two sphinxes. I also found the mosaic with theatrical masks. So I’m pretty sure I saw all the major artwork in this museum but I should have been more prepared. According to my photos, I must have walked behind the Palazzo Senatorio and found the terrace, where you get an excellent view of the Roman Forums, before I went to the Palazzo Nuovo.

After leaving the museum I returned to the nearby Theatre of Marcellus. I saw the ancient Roman columns embedded in the side of the church San Nicola in Carcere and eventually I found the Porticus Octaviae but it was covered in scaffolding. From there I walked to the ancient Forum Boarium by the Tiber River where I saw the Temple of Portunus and the Temple of Hercules Victor. The church Santa Maria in Cosmedin which has the “Mouth of Truth” is across the street so I stood in line to take a photo of that. Everyone else was with someone to take their photo with their hand in the “Mouth of Truth” but I was alone so I just took a photo of “Mouth of Truth”. There was an attendant to make sure everyone only took one photo to keep the line moving. I also entered the church and I remember there were signs expressly prohibiting dogs. I bought a coke from a food stand near the church because it was much hotter in Rome than it was back home. 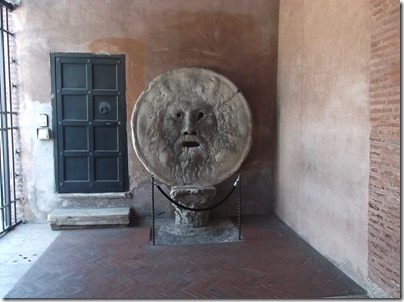 I then walked across Ponte Palatino and saw Tiber Island and Pons Aemilius again. I also revisited Taverna Priscinula Pizzeria and ordered that same pizza, four cheese pizza with truffle sauce which I liked so much. I drank too much wine and became a little tipsy. I walked pass the Open Door Bookshop again but this time I went inside and bought a French novel at random, L’amande by Nedjma, which turns out to be an erotic novel “The Almond” written by an observant Muslim woman in contemporary North Africa. I then found the church Santa Maria in Trastevere which I entered to see its famous 13th-century mosaics. This church can be seen in the Italian film Scent of A Woman starring Vittorio Gassman, one of the better films I saw in preparation for my trip. 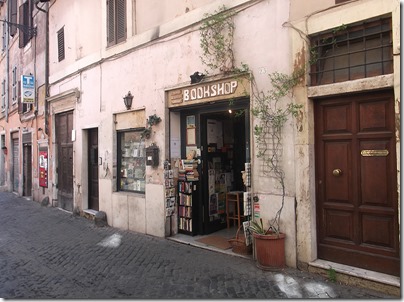 I didn’t spend any more time in Trastevere. I walked back across the Ponte Palatino and along the Circus Maximus until I reached the metro station. I returned to the Termini station where I used an ATM and bought a can of Bavaria Holland Lemon Malt, a non-alcoholic drink, from a vending machine. At first I was surprised that beer was sold from vending machines but then I noticed that it was non-alcoholic. I had supper at Ristorante Donati. That evening I had spaghetti with bacon (Carbonara) and eggplant with cheese.