Since I accomplished a few things on Saturday evening, my Sunday schedule was thrown off. The next thing I had scheduled was a visit to Librairie Michel Fortin but they didn’t open until 11:00 a.m. so I went to La Brioche Lyonnaise first for breakfast. My bed and breakfast only gave me coffee, orange juice, and a croissant so I needed more to eat. La Brioche Lyonnaise interested me because Lyon will be the next French city that I will research. I already have many travel guides to Lyon and I’ve done some preliminary research.

To get to the La Brioche Lyonnaise, I took the Orange Line in the direction of Côte-Vertu to Berri-UQAM Station. It was only one metro stop away. They open at 8:00 a.m. so I can go there directly after having the continental breakfast. I ordered La Lyonnaise which consisted of a large cup of coffee, some flat bread, and a pastry of some kind. 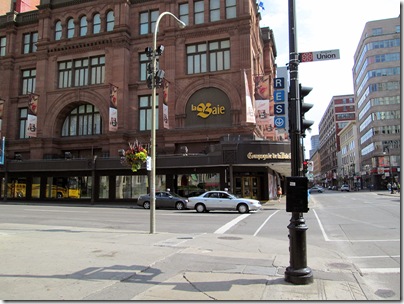 After breakfast I headed out to Philips Square where I took photos of various landmarks while waiting for La Baie d’Hudson to open, also known as the Hudson Bay Company. When this famous department store opened, I took the escalators up to the fifth floor and bought an extra piece of luggage for all the books I would be buying. Fortunately there was a sale on luggage and I bought a small one for less than $100.00. I had to go to the ground floor to find a cashier. There was another awkward episode involving trying to get a bag large enough for the luggage. Eventually I told them to forget it. I immediately returned to the bed and breakfast with my empty piece of luggage. With that taken care of I went straight back to Phillips Square and stopped in at Indigo which also opened at 10:00 a.m. There I had yet another awkward moment when a sales lady asked me something in French. I froze and didn’t say anything at all until she repeated herself in English. Oh the shame of it all! I’ve been studying French all year and still can’t manage to speak one word of it. Oh well, part of the purpose of this trip was to get me to make more effort. 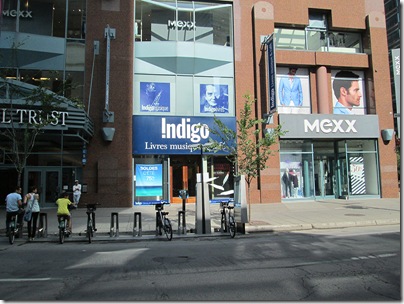 At Indigo I bought a copy of Yves Beauchemin’s novel Le matou, which I’ve read in English as The Alley Cat. I’ve also seen the film version on DVD. I also bought a French book on Italian grammar, a guide to conjugating French verbs, and New Orleans … Like A Local. I’ve become interested in New Orleans and Louisiana because it is part of the Francophone world. The cashier spoke English and remarked on how ambitious I was based on my purchase. C’est vrai!

After that Librairie Michel Fortin was finally open so I visited that bookstore. Librairie Michel Fortin specializes in language learning books and it is located very close to Saint-Louis Square so it was pretty convenient. I really went wild at this bookstore and spent more than $100.00 on a peculiar selection of books; a Cajun French Dictionary, a Kit De Conversation Neerlandais (a French book on Dutch), a book on Italian verbs and essential grammar, and another book on Italian for foreigners Italiano Per Stranieri. Oh, and a book of the play Les Muses Orphelines by Michel Marc Bouchard. The exchange with the cashier was quite awkward, perhaps because I did say "Bonjour" when I entered which sent the wrong language signal. 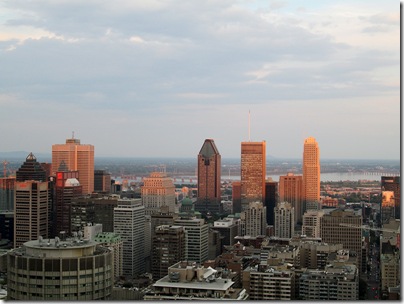 That pretty much took care of everything I had scheduled for Sunday so I had to move on to Monday’s schedule. I decided to visit the Parc du Mont Royal. I entered the park at the Peel Street entrance after a long uphill climb on Peel Street. There I found countless stairs I also had to climb to reach the overlook. I had to rest on every landing because it was hot and exhausting to climb all those steps. But it was worth it because the Kondiaronk Belvedere provides an impressive view of the skyscrapers in downtown Montreal. I bought a popsicle from a vendor there because I needed to cool off and slake my thirst. That made my fingers sticky but I found a drinking fountain where I washed off the syrup. I took a lot of photos of the Montreal skyline but the plaza was crowded with tourists. Later I climbed a more gently sloping trail to the Mount Royal Cross which is an icon of the city. I stayed at the Kondiaronk Belvedere for several hours until the sun had set in order to get some photos of the skyscrapers caught in the last rays of the sun. I also got some photos of the city just as the lights started to some on. Fortunately, there were some vending machines in the chalet so I was able to buy some soft drinks and snacks. By the time I left you could barely see the steps on the stairs down the mountain. I really left at the last possible moment. 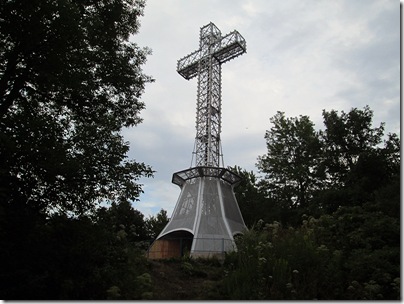