It Wasn’t Sunny In Philadelphia

Yet across the gulf of Pennsylvania, intellects vast and cool and unsympathetic, regarded our city with envious eyes, and slowly and surely drew their plans against us.

To paraphrase the opening line of H.G.Well’s novel, The War of the Worlds. My reconnaissance mission to Philadelphia was a complete success and will pave the way for our Pennsyltucky invasion of the city. Philadelphia, after all, is another world to everyone else in the state.

But seriously, my trip to Philadelphia went according to plan and served to improve my knowledge of the city. I left Williamsport at 4:00 a.m. on Friday and the drive took four hours, not the three hours the Google driving directions give as the driving time. It is important to know approximately how the long the drive will be to the Philadelphia International Airport if I leave from there on my European vacations. The most stressful part of the drive is the Schuylkill Expressway, also known as the Surekill Distressway, which has several lanes and exits to confuse you. If you are not in the correct lane you will often find it almost impossible to merge into the lane for your exit. Fortunately, I found a YouTube video which showed me exactly what my exit would look like and it was early enough in the morning that traffic was light.

I stayed at the Holiday Inn Express Midtown because I won the Avenue of the Arts contest for a free night there. I mapped the exact route through Center City to reach the hotel’s garage and almost followed that route exactly except South 12th Street was blocked off so I had to go further to South 10th Street. It was another fine example of why you don’t want to drive through the downtown area. I actually tried going down South 12th Street before realizing the truck in front of me was backing up so I was forced to awkwardly back out of the street. I parked on the third floor of the hotel’s parking garage. The parking attendant made me park my car again and took my keys, which I did not appreciate because I was planning to store purchases in my car. 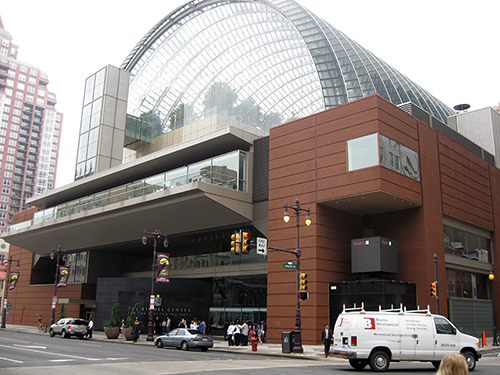 I could not check in until 3:00 p.m. so I left my bags in my car and embarked on an early morning walk to take photos. Altogether I took 378 photos in two days which may seem a bit excessive but my intent was to document the location of many establishments.First I found various theaters on Broad Street south of City Hall, the area known as Avenue of the Arts. I had neglected to visit this area on previous trips to Philadelphia. Then I went to the famous park, Rittenhouse Square. Rittenhouse Square could be compared to Central Park in NYC because it is a very fashionable area to live in and the park is surrounded by the city’s tallest skyscrapers. Since it was Spring, the park looked lovely and green. Rittenhouse Square was another area of the city which I neglected to visit on previous trips. 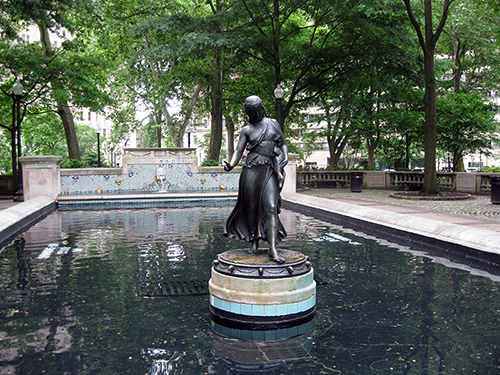 My next goal was to try the Philadelphia public transportation system, SEPTA. I had a day pass that I ordered over the Internet. I walked to the 13th Street subway station which is on the east side of City Hall. After walking down a long underground passageway I found the subway station on the first level. I had to show my pass to the SEPTA employee in the booth to get through the turnstile but at least she was friendly unlike the NYC booth attendants. Then I took the stairs down another level where the green line Trolleys were located. Although trolleys are common in Europe, I think Philadelphia is probably one of the few American cities that still has trollies. The trollies are like a single subway car the size of a large bus. I took the number 13 trolley west to University City. It would have been too far to walk there and you have to cross the Schuylkill river.

University City, in West Philadelphia, is were the University of Pennsylvania is located as well as many more college campuses. Philadelphia has a wealth of institutes of higher education which now serve as one of the major employers. Philadelphia also has many medical facilities which are another major employer. Education and health care are two facets of the service economy which cannot be outsourced. A lot of the smaller cities in Pennsylvania survive solely on the basis of these two “industries”. Therefore it was important for me to check out this area of the city. Fortunately, there are a few museums in University City which make it worthwhile. 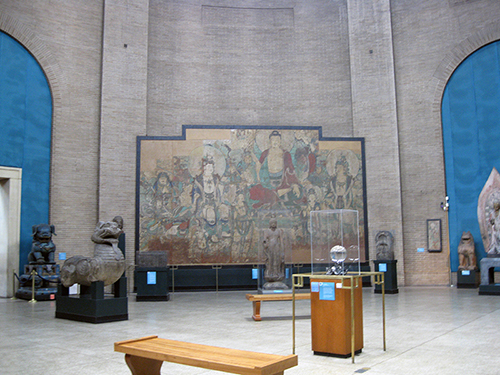 The first museum I visited was the University of Pennsylvania Museum of Archaeology and Anthropology. I bet many tourists never make it to this museum since it is hard to get to from the Benjamin Franklin Parkway where most of Philadelphia’s museums are located. Although the museum was small, some of the exhibits were quite impressive. The Chinese Rotunda and Gallery was a massive room filled with colossal Buddhist statues and monumental Chinese art. The Egyptian collection was also impressive with mummies, sarcophaguses, and excellent black statues of cat gods. Unfortunately the Silk Road exhibit had been returned to China and all I saw were numerous cardboard cutouts that stood in the place of all the items. If you like the antiquities at the Metropolitan Museum of Art then you would probably like this museum too. 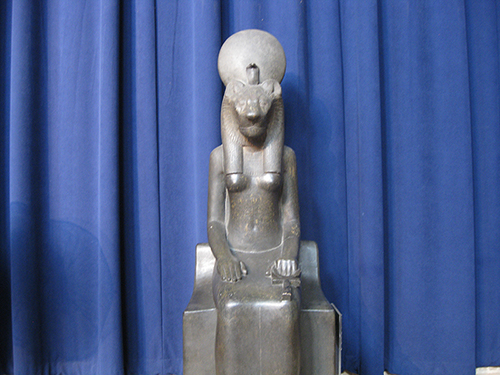 After leaving the museum I went to Avril 50, a store that sells international magazines. It is surprisingly difficult to find any magazines in a language other than English or Spanish in the United States so I’m always looking for the rare newsstand  that carries a few. Unfortunately, I did not find any German magazines at this store but I did buy a copy of Paris Match with a cover story on the recent Royal Wedding. My final stop in University City was the Institute of Contemporary Art. This art museum is very small and I not find the exhibits very interesting but at least it was free. By this time it had begun to rain. It rained off and on all day during my first day in Philly. But I can’t feel that was unlucky because it had been raining all week. I picked up a copy of City Paper from a newspaper vending machine outside of the museum. One of my goals was snag an issue of City Paper and Philadelphia Weekly to examine their advertisements and article. Fortunately, these are free publications that can be obtained from the newspaper vending machines on virtually every street corner.

The return trip on trolley line 34 east to Center City was extremely crowded. Back at the 13th Street subway station I tried out the vending machines that sell tokens. As I’ve said before, becoming familiar with the public transportation system was one of my goals. The next item on my agenda was lunch at the Reading Terminal Market. This was another Philly landmark that I neglected on all previous trips, even though I walked right by it on my 2009 trip. The Reading Terminal Market is an impressive food mall. It has a lot of Pennsylvania character with its Amish restaurants and local food. I had a bacon cheeseburger with homemade French Fries at the Dutch Eating Place. I was expecting an Amish dining room but the Dutch Eating Place is actually more like an American Diner with a counter and bar stools. I also spent some time wandering around the market which had an area for cooking demonstrations and even an used bookstore. 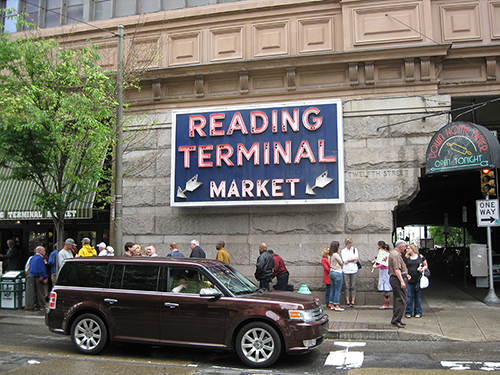 After lunch I had to wander around a little more around Center City before it was finally 3:00 p.m. and time to check in at the hotel. I had to return to the 3rd floor of the parking garage to get my bags after retrieving my keys from the parking attendant. The desk clerk was kind enough to refund me a night after I showed her the fax from the Avenue of the Arts, although there was some uncertainty at first. I took a shower to freshen up and then went on a shopping spree. It was a book lover’s shopping spree because I’m not into fashion or luxury goods. 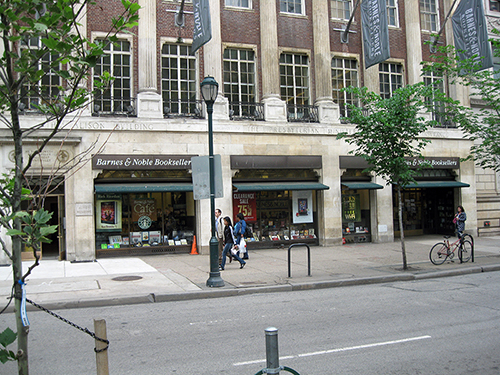 Philadelphia still has many bookstores. This could be because it has so many universities, colleges, and other institutes of higher learning. First I went to Joseph Fox Bookshop on Samsum Street and bought a Knopf Mapguide to London and the novel Saturday by Ian McEwan, in anticipation of my next trip to a major European city. Then I went to Robin’s Book Store on South 13th Street where I had more trouble finding something I wanted to buy. Eventually I settled on Atomized, a novel by the French writer Michael Houellebecq. Finally I went to the Barnes & Noble bookstore on Rittenhouse Square where I really splurged on guidebooks. I even bought Pimsleur’s Basic German because I am reluctant to discontinue my study of German after making so much progress. Later on I went to the TLA Video store on Lucust Street. I’ve been getting their catalogs in the mail. This video store stocks lots of art house films on DVD including an impressive collection of Criterion Collection films. I bought Lars Von Trier’s film Antichrist because this director has been in the news after being banned from Cannes due to some Hitler remarks. I think that was just a marketing stunt. It worked on me! I had never heard of that director before then. But I also bought Santa Sangre, a film by Alejandro Jodorowsky, which promises to be very surreal. I saw that DVD on Amazon based on my history of purchases.

Although I’ve been to Philadelphia many times before, this trip showed me that the city still has more to offer. You definitely cannot completely explore the city in just the day or two that most tourists give it. It is a shame that Central Pennsylvanians are so hostile towards Philly and don’t take advantage of its cultural resources. Susquehanna Trailways offers two bus trips to Philadelphia which I plan to take advantage of.